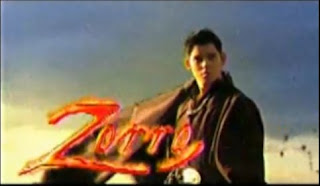 image from pinoyexchange.com
We watched half the premiere airing of Zorro, GMA's newest show starring Richard Gutierrez and Rhian Ramos. I like Richard and Rhian and I might watch this again in the future but the pilot episode left a lot to be desired, because of Zorro himself. Richard just look too paawa on some scenes. And the long hair is too stupid. As usual, Joel Torre, Jacklyn Jose, Leo Martinez and Eddie Gutierrez are topnotch. Rhian is even okay on some scenes, but sometimes ineffective in portraying a Maria Clara. Michelle Madrigal is too feisty while TJ Trinidad is a revelation. He is very good, much like Ian Veneracion. Even the musical score is top notch, what with Janno Gibbs singing the theme.

We only watch half of the show because the kids and the husband lost interest. Me too. It doesn't say much for Zorro to me, but reports said it got a 38.2% rating. Okaaay!