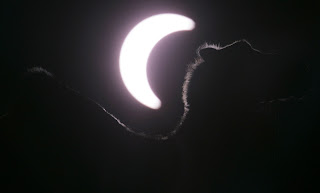 above picture is of the August 2008 eclipse
source
I wish we could see the partial solar eclipse happening today. It is said to be the longest solar eclipse of the 21st century, according to Wikipedia, lasting at 6 minutes, 39 seconds. The NASA has dedicated a very detailed explanation on this eclipse.
Unfortunately for us, cloudy skies will prevent us from seeing this phenomenon. Even other parts of the world like India were not to see the eclipse because of thick clouds. I guess we will all just have to wait for pictures later. But you watch the live video here. In the meantime, let us just look at more picture like the one above from the August 2008 eclipse from Boston.Com