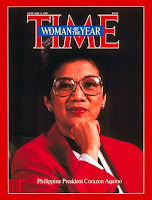 I support the nation's call to make President Corazon Aquino as a national hero. If the show of gratitude and love for her this past few days is any indication, then she indeed deserve the honor.

I was looking at this document entitled "Selection and Proclamation of National Heroes and Laws Honoring Filipino Historical Figures" from the National Commission for Culture and the Arts and these are the criterias listed for National Heroes:

1. Heroes are those who have a concept of nation and thereafter aspire and struggle for the nation’s freedom. Our own struggle for freedom was begun by Bonifacio and finished by Aguinaldo, the latter formally declaring the revolution’s success. In reality, however, a revolution has no end. Revolutions are only the beginning. One cannot aspire to be free only to sink back into bondage.

3. Heroes are those who contribute to the quality of life and destiny of a nation. (As defined by Dr. Onofre D. Corpuz)

Based on the above criteria, Cory can indeed be made a National Hero. If there is one thing I learned during the nation's grief for her death, her life of service was characterized by her righteousness and simplicity. These are just two traits that are sorely lacking with our current public officials. I wish that in her death, our public officials will see fit to honor her legacy by living by her example. That is a tall order indeed, but making her a national hero will make it easier for the people to realize that it is possible to be just that.