My Son's Bike Was Stolen- Time To Get An Insurance? 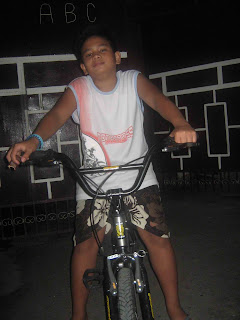 Remember this bike we gave our son just last December as a Christmas present? Well, it was stolen last Saturday. We were not at home when it happened as we were visiting my sister in Taytay for her son's 2nd birthday. One of the tenants inside the compound had a drinking spree, and bike was discovered missing Sunday morning. Too bad there is no motor trade insurance for bicycles. My husband was understandably furious! We had a talk with the neighbor about the incident and we extracted from them a promise that they will pay for the theft. We suspect that one of their visitors took the bike when they went home after midnight. There were two bikes inside the compound and the bigger one was covering ours. But they left the other bike and even moved it from its usual place. Of course, the neighbor denied that one of their friends would do it, but it was a strange coincidence that we were not home, and they had people coming in and out of the gate and the bike went missing! It breaks my heart that just last night when we asked Drexelle to buy something from the store and then he did a double-take to get his bike, only to realize it was gone. He just scratched and shook his head and then went out. My husband told his mother that it was up to her to decide whether she should ask the tenants to leave, but she was hesitant since they promised to pay for the loss, in installment! But I am not sure that I can still trust them. Oh my!