Medicines for my Sinusitis

Words that I will always dread hearing from my doctor are " you need an operation." Thankfully this time, I was just prescribed steroids and antibiotic for my sinusitis. You see, I had a functional endoscopic surgery more than seven years ago because I always had blocked sinuses. Polyps have formed inside my nose and the only way was to had them scraped! But once a polyp-former, always a polyp-former my doctor said so when I had a check up last year, I was given steroids and antibiotics. Thankfully, the polyps shrunk and while my sense of smell was 'intermittent' I was already feeling good. 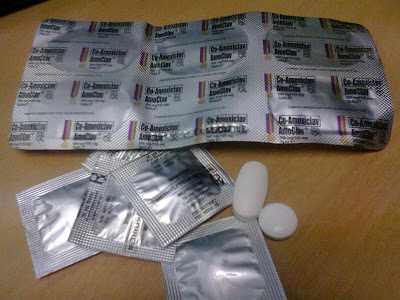 But for the past few months, I was having headaches and pain on the left side of my face so I went again for consultation to my ENT. Again, I have polyps so I am on medications now. Hopefully, the polyps would have shrunk by next week as I am taking these drugs 3 times a day. But I would rather have them anytime than an operation. Hope to be better by next week! So I want to remind all you of if you feel something wrong, it is best to go to your doctor. if my polpys are gone by next wee, I would have to see my doctor every 3 or 6 months to avoid having them again and treat them earlier!