On my way home yesterday, I saw a group of men putting up campaign materials on the street. I am not sure who their candidate is because I didn't see whose face they are putting up, but I had to take pictures when I saw these two campaign materials. They saw me taking pictures, and one even shouted something I didn't quite hear. Good thing my camera is in my bag.

This poster of Jessica Daza was propped at the top of the street marker. This is in Puray Street, in Santol, QC. 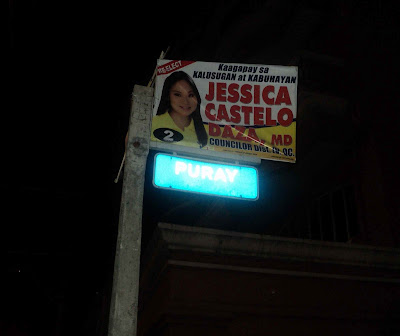 This one below is of Dante Lagman, pinned on a coconut tree. Kawawang puno. Still along Puray Street. 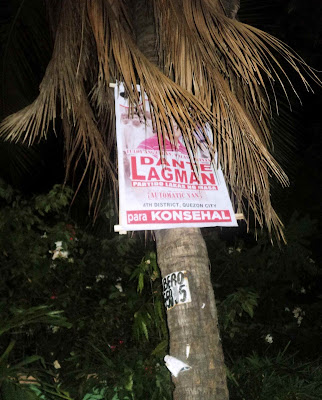 According to this news article from Sunstar:

All candidates are also mandated not to place posters in areas outside the common poster areas that were pre-identified by the local election officers in cities and municipalities, such as plazas, markets, and barangay centers.

They are, on the other hand, barred from placing campaign materials in trees, flowering plants, shrubs located along public roads, in plazas, parks, school premises or in any other public grounds as well as posts, the wall of a building or an existing public structure that is in active use.

You be the judge if they made any violations. #DapatTama.