Manny Pacquiao and the Swine Flu 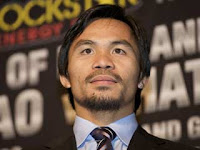 image from GMA News TV
If you were tuned in to the news this morning, you would know that Manny Pacquiao, his wife Jinky, his mother Aling Dionisio (este Doña Dionisia), and the Team Pacquiao has arrived at the NAIA terminal 2 and was greeted by the usual circus. Despite the Department of Health's request that he defer his flight to next week, Manny's explanation actually made sense. In the US, there are already confirmed cases of swine flu and since lots of people flock to Manny to have pictures taken and to have his autograph, he and his team have more chances of being infected there than here in the Philippines. And besides, he misses his kids. But although I can understand that, I fear for Manny's kids and family here in the Philippines who greeted him enthusiastically with no thoughts whatsoever of the swine flu. In the news on TV, I did not see any precautionary measures by the Department of Health and the airport personnel regarding the fear of swine flu. Correct me if I'm wrong. They were not quarantined at all. I even saw DENR Secretary Atienza and his son as one of the firsts to greet Pacquiao. Oh well, whatever. Maybe his fame has really eclipsed our need to be vigilant.

On a side note, I commend Manny for calling the media's attention to the other boxers who also won during the undercard fights that day. He gallantly gave the floor to them.

Well, let's just all congratulate Manny and the whole team for a job well done and just pray that this concern about the swine flu is really unnecessary and that they are all as healthy as a bee.