Senator Jamby Madrigal is No Stateswoman For Me 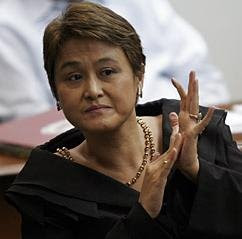 I was watching the news in Unang Hirit this morning and I saw Manny Villar doing an ocular inspection with the members of the press of the "double-insertion" road project. He was explaining why there was never a double insertion because the budget was for two different projects and how it would benefit the residents of Cavite. Then, Senator Jamby Madrigal was shown on TV saying, correct me if I'm wrong, "Itik, pinirito nya yung itik tapos pinutol putol nya." It was obviously a dig on Senator Villar's infomercial but I cant see the relevance of that line and it irritated the hell out me. I was thinking, why cant she talk with a little more sense, more befitting her education and her position? She could make a very intelligent rebuttal if she wants to. Why is there a need to speak like this? I was hoping that the good lady senator and all our senators would act like statesman(woman). But I think that would be asking too much. Far too much.