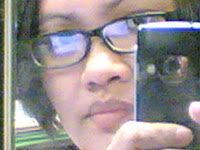 I had the worst day last Monday when I had a headache so bad, I was really crying! I really wasn't sure what caused it at first. I had a good night's sleep and got up on time to prepare breakfast. Then at work, my friend Vangie was on leave because she went to Baguio for the Panagbenga festival and so I had to do the work of two people. I was hard at work on my computer as early as 8 am and by 11 am, I already had a headache. I paused from work, unable to concentrate anymore and rested my eyes. I tried doing other things away from the computer, but by then the headache was so bad. I skipped lunch to catch an hour of sleep, but at quarter past one, I was already looking for the nurse. The headache was so bad I was already crying to her on the phone. So she had me sleep at the clinic for 2 hours, but when I woke up it was still there. She told me that I may already need eyeglasses and I have to agree. I just realized that staring at the computer early that morning could have triggered the migraine attack. I used to wear eyeglasses, but they make me look old so I traded comfort for vanity! Ha ha, and now this migraine is what I reaped. Anyway, I will be sure to get new eyeglasses soon. While in pain, I realized that I would rather look old rather suffer again. Indeed, health is wealth!

The picture above was a mirror-project using my cellphone way back in 2007. I look awful in glasses!