I almost forgot to write about the fact that you can buy souvenir items from stores near each of the places that we went to on our Camiguin Day Tour.  The picture below as taken near the Katibawasan Falls where several stores sell t-shirts and bags. Of course, even though it was not in season, lansones where sold outside of the Guiob Church Ruins, and even near Pabua's Cottages. 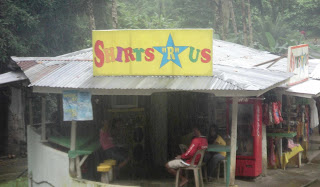 This is just one of the shirts being sold at the the one of the stalls. While they are not as cheap as those in Boracay which sells for P75 each, at P100 and with nicer quality, its already a steal! 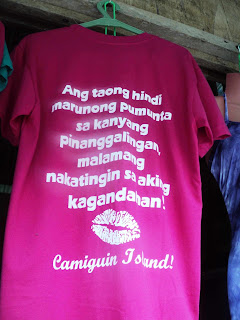 Fruits are also great as pasalubong as it was so cheap in Camiguin.  But make sure that you have enough baggage allowance for all the fruits that you will buy otherwise, you will end up paying for more, ha ha ha.